The weekend was a success! Yay! I made it through TSA (on the tightest timeline...but that's a different story), carried it on the plane, and was able to frost/assemble with plenty of time before the wedding. I am really happy that it's over, and extremely happy that it turned out so well!! Here are photos of the process:

I packed the cake in a large insulated bag and took it as my carry-on. I was even allowed to take two ice packs in the container.

We got to the airport pretty late, so the Pre-Check line was closed and I had to go through...regular security ugh! ;) The TSA agent did select my bag for extra screening and tested it for explosives. When he opened the bag, he saw all of the layers and asked "What is this? Bread?" I said no, it's a wedding cake, and I'd REALLY like to take it on the airplane. He looked at it and said "I don't know......." (insert my heart beating SO FAST) "......it looks pretty tasty!" I thanked him and snatched the bag and ran to my gate (did I mention we were really late for our flight?). Luckily we made it, and there was space in the overhead bin for the cake to safely sit for the 1 hour flight to Oakland.

We stored the cake in my friend Jason's fridge overnight (thank you Jason!!!!) and the next day was frosting/assembly time! The bride and groom were home for the day, and let me assemble the cake in their new house. I got to work in the most beautiful kitchen!! It made the assembly process so enjoyable to have all of that space! And I got to break in their wedding present - a new Tiffany blue KitchenAid mixer :)


First up was the bottom layer. They only wanted frosting in between the layers, so I leveled the layers, then lightly brushed them with water mixed with a couple of drops of vanilla. I REALLY wish that I had brushed them with simple syrup, or had a heavier hand with the water mixture. When I tasted the layer as I leveled it, they seemed moist, but at the wedding, I thought the bottom layers were a little dry unless you ate it with a bite of icing. Luckily the icing helped the dryness, but I really wished that I had the simple syrup. I think the several freezer trips + refrigerator trips contributed to drying out the layers (freezing at home, thaw on the plane, freeze overnight, frost, fridge overnight, transfer to venue, fridge until serving...) so I think the syrup would have helped. But like I said, the frosting saved it :)

I made sure to add dowels to support the weight of the tiers. The cake was HEAVY!!!! Buttercream weighs a lot... I made 2.5 batches of the "wedding cake" size of the Swiss Meringue Buttercream recipe... (I made half a batch at a time due to the mixer size, but it worked really well. I also made sure to carefully measure the dowels to the same size, to avoid the leveling mistake from last wedding cake.

Next up was the middle tier. This was my favorite chocolate cake, and I was planning to just use raspberry jam in the middle. I realized that I needed the height of the buttercream to make the tiers even, so I first spread jam on the layers, then spread buttercream in between each layer. Fortunately the jam made the chocolate layer nice and moist!


I also added dowels to the chocolate layer, then made the top tier just like the bottom tier (vanilla cake with buttercream filling). Then I stacked it all! Here it is with only the crumb coat, and the stacked tiers, not pretty, but it's getting there!
I added another layer of frosting on all of the tiers, and also covered the cake boards that the tiers rested on. Then I dragged my spatula and made some texture in the frosting for a "rustic" effect :)


At this point, the cake was stored in the fridge until the florist brought flowers to put on the cake. They placed the flowers on top and on each corner of the tiers. We also added a cute pennant cake topper. Here is the final product!!


The beautiful bride and groom loved the cake, and were so happy to cut it at their wedding.

I am so happy with how it turned out! It looked really elegant and tasted (mostly!) great.

Also, the bride and groom are Polish, and had so many Polish traditions at their wedding, including this amazing sausage wagon. It had tons of sausages, pickles, bread, lard, and vodka. If you were hungry at any point during the reception, you could come slice off a piece of sausage for a snack!


Congratulations Beata and Marcin!! I'm so happy we could celebrate your wedding and that I was able to make your cake, even from long distance! Love you guys! 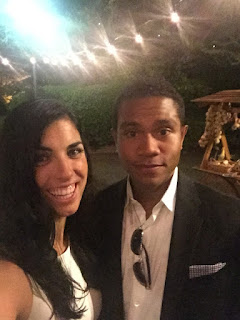 I'm happy to report that the cake is baked! I did the whole thing last weekend, and am happy to be over that hurdle. I had forgotten just how much time it takes to bake a 9-layer cake. The problem with not having a commercial kitchen is twofold: (1) I have only one pan of each size, so I have to at least have 3 rounds of baking, (2) a home oven is only so big, so it can only accommodate one large pan, or two smaller pans. If I had two ovens, or more pans, the process would have been faster, but alas.

I made the bottom 14" square and top 6" square tiers a vanilla buttermilk cake, and made the middle 10" square tier a chocolate cake. I actually had to do some math to get the proportions for the 14" square cake, as the recipe only went up to 12" square. Also, because making the batter for 3 layers of 14" square would NEVER have fit in my kitchenaid mixer, I did even more math to scale the recipe to make it one layer at a time.  It actually worked really well! Here are some pics:


I had to do a lot of creative freezer organizing to get everything in there, but it worked out in the end. There's even room for ice cream, because priorities!!

I also did a lot of research on TSA regulations for carrying frozen foods on the plane. Apparently you can take frozen liquid (and ice/gel packs) as long as they are completely frozen at the time of going through security. They can't even melt a little bit. As for other food, if it's not liquid, it's permitted on board. But the caveat is, everything is of course subject to inspection AND the final decision is left at the discretion of the screening agent. So I'm feeling better about my odds of getting the frozen cake on board, but not 100% confident. I may need to take a cupcake or something as a bribe, just in case ;)

I think my true backup plan might be that if they don't allow me on the plane, I'll just go home and drive to Oakland with the cake. While that's not ideal, the 5-6 hours it will take to drive, is actually LESS time than it would take me to re-bake the entire thing, not to mention acquiring supplies and ingredients once I arrive, and the stress on top of it all!  Let's hope it doesn't come to that...

I mentioned last post that my next big project is a wedding cake for some good friends in Oakland. Because of the distance between Oakland and LA, I am not making the entire cake at home and driving it to the wedding (like I did last time). That means I have a LOT of pre-planning to do, if I want to make this happen. So here is my plan:

So aside from the whole flying with frozen cake issue, I think the plan is pretty solid. I will bake the cakes this weekend. The bride and groom requested a three-tiered square cake to feed approximately 120 people. They want the top and bottom layers to be vanilla, and the middle layer to be chocolate. The chocolate layer should have fruit filling, and the vanilla layers should have buttercream filling. The entire cake will be frosted in white buttercream, and decorated with flowers from their florist. I haven't decided what kind of fruit filling I'll make yet, but I'm leaning toward raspberry, as that is usually a crowd pleaser!

I am going to bake the chocolate and vanilla cakes this weekend. Check out the ingredients I'll need for one 14" and one 6" square vanilla cake, and one 10" chocolate cake (each cake will have 3 layers):

As always, the wedding cake recipe I use comes from the amazing cake book Sky High. I use both the chocolate and vanilla cake recipes for every big cake project that I've done, including the gluten-free wedding cake! They always turn out spectacularly.

I think I will go to Smart and Final to get bulk flour, sugar, buttermilk and eggs!! I'll post again once I've finished the baking, and all cakes are wrapped and in the freezer. Here we go!